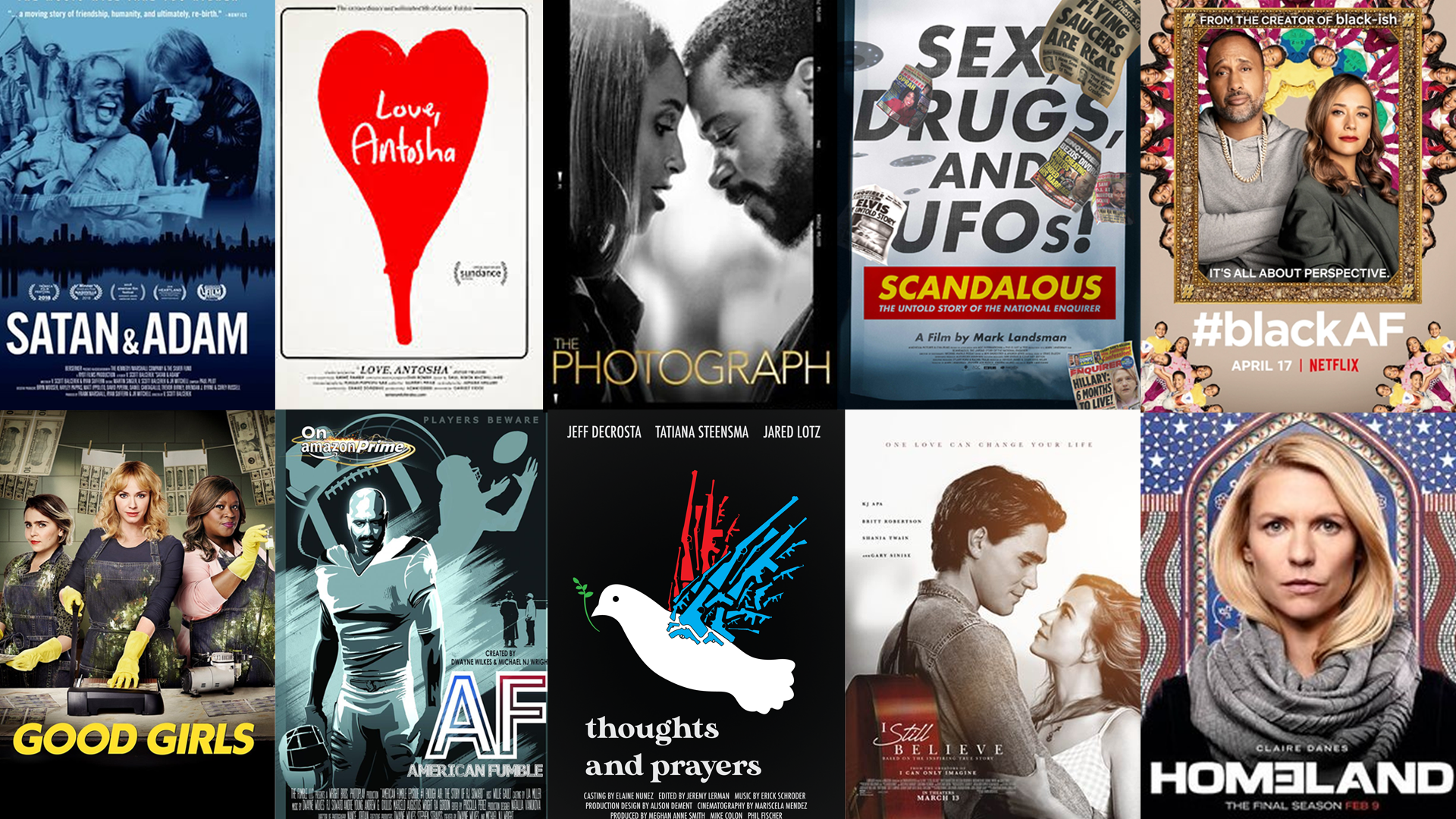 With movie audiences across the country taking COVID-19 precautions and staying at home, AFI would like to take this opportunity to celebrate the recent work of alumni. And you can help support our alumni too!

Whether it’s a long-awaited digital premiere or a first-run theatrical release headed to VOD early, be sure to check out the following AFI alumni projects that are available to stream online.

Synopsis: Record setting USC Wide Receiver and NFL 1st Round Draft Pick, RJ Soward shares his accounts of the compulsions that drove him out of the league and threatened to end his life.

Synopsis: From Kenya Barris the creator of Black-ish, Grown-ish and Mixed-ish, With new money and expensive tastes, Barris and his family navigate success and explore the struggles of being unapologetically Black and wealthy.

Where to Watch: Coming to Netflix on April 17

Synopsis: Based on the bestselling comic book, Vin Diesel stars as Ray Garrison, a soldier recently killed in action and brought back to life as the superhero Bloodshot by the RST corporation.

Where to Watch: FandangoNOW

COLOR OUT OF SPACE

Synopsis: From the mind of H.P. Lovecraft, COLOR OUT OF SPACE is a cosmic nightmare about Nathan Gardner (Nicolas Cage) and his family, whose recent retreat to rural life is quickly disrupted by a meteorite that crashes in their front yard. The Gardners’ peaceful escape quickly becomes a hallucinatory prison, as an extraterrestrial organism contaminates the farmstead, infecting everything and everyone it can.

Where to Watch: VOD Options

Synopsis: BOOMERANG is a half-hour subversive, smart, serialized comedy, fueled by romance, friendship, gender politics, love and of course, sex. The story picks up roughly twenty-five years after the original movie, and centers on the offspring of the iconic main characters.  Executive Produced by Lena Waithe and Halle Berry.

Where to Watch: BET

Synopsis: In Devs, an FX limited series, a young software engineer, Lily Chan, investigates the secret development division of her employer, a cutting-edge tech company based in Silicon Valley, which she believes is behind the murder of her boyfriend. Written and Directed by Alex Garland (Ex Machina, Annihilation, 28 Days Later).

Where to Watch: FX

Synopsis: When Los Angeles actor Cody McClain falls for New Yorker Briley Williams, they attempt to beat the odds of long distance love. But, when Cody books the lead role in a blockbuster film, they realize that distance may not be their biggest hurdle

Synopsis: When three suburban moms get tired of trying to make ends meet, they decide it’s time to stick up for themselves by robbing the local grocery store. But when the manager catches a glimpse of one of them and the loot is far more than they expected, it doesn’t take long for the three best friends to realize the perfect getaway will be harder than they think.

Synopsis: In the final season, Carrie Mathison is recovering from brutal confinement in a Russian gulag. Her body is healing, but her memory remains fractured. This is a problem for Saul, National Security Advisor to President Warner, who has been dispatched to engage the Taliban in Afghanistan peace negotiations.

Where to Watch: Showtime

Synopsis: The true-life story of Christian music star Jeremy Camp and his journey of love and loss that looks to prove there is always hope.

Where to Watch: Available on Amazon Prime Video

Synopsis: A portrait of late actor Anton Yelchin, ‘Love, Antosha’ explores his successes and struggles through his journals, photography, original music, and interviews with his colleagues, including Chris Pine, Kristen Stewart, and Jennifer Lawrence.

Synopsis: After her boyfriend rejects her marriage proposal, Leah Schwartzman checks herself into the “Late Blooming Bride” retreat, which prides itself on transforming less-than-perfect women into “Marriage Material.”

Where to Watch: Fox Searchlight

ONE WEEK AND A DAY

Synopsis: As Eyal finishes the traditional Jewish week of mourning for his late son, his wife Vicky urges him to return to their routine – but just because the shiva has ended doesn’t mean it’s life as usual.

Where to Watch: Amazon Prime, Kanopy and iTunes.

Synopsis: On an island of haves and have-nots, teen John B enlists his three best friends to hunt for a legendary treasure linked to his father’s disappearance.

Where to Watch: Coming to Netflix on April 15

The film was originally scheduled to have its World Premiere at SXSW. Since then, it has been featured on Short of the Week as one of 5 films programmed at the festival to check out. Watch the trailer here.

Synopsis: When famed photographer Christina Eames dies unexpectedly, she leaves her estranged daughter, Mae, hurt, angry and full of questions. When Mae finds a photograph tucked away in a safe-deposit box, she soon finds herself delving into her mother’s early life — an investigation that leads to an unexpected romance with a rising journalist. Starring Issa Rae and LaKeith Stanfield.

Where to Watch: Coming to iTunes on April 28

Synopsis: A successful fashion designer who gave up her big-city career, Ingrid Gipson discovered a reclusive life of solitude and unhindered creativity in Arkansas’ rural Ouachita Mountains. As if through poetry, she opens up her world again to those of us willing to listen.

Where to Watch: PBS

Synopsis: SATAN & ADAM chronicles the unlikely pairing of legendary one-man-band Sterling “Mr. Satan” Magee and harmonica master Adam Gussow. Shot over 20 years, the film showcases one of the greatest blues duos you probably never got a chance to see.

Where to Stream: Netflix and iTunes

Synopsis: SCANDALOUS is the sensational true story of The National Enquirer, the infamous tabloid with a prescient grasp of its readers’ darkest curiosities.

Where to Watch: Coming to CNN starting April 4

Update: The anti-gun violence short satire, directed by Gold and written by Terry Rossio (PIRATES OF THE CARRIBEAN), has been impacted. It was just starting its festival run, but all festival screenings have unfortunately now been canceled. Visit the official website to find out more about the film.

TONI MORRISON: THE PIECES I AM

Synopsis: Now on HULU, Toni Morrison: The Pieces I Am, explores the extraordinary life and artistry of the legendary Nobel laureate. The film covers her remarkable journey from Lorain, Ohio to Stockholm, Sweden, and beyond. Her career includes 11 novels, non-fiction books, and plays, as well as her role as an editor of iconic African American figures and an educator at Princeton University. Interviewees include Morrison, Hilton Als, Angela Davis, Fran Lebowitz, Walter Mosley, Sonia Sanchez, Peter Sellars and Oprah Winfrey among others.

Where to Watch: Hulu

Synopsis: As a young boy, Daniel (Jovan Adepo) followed his sister into the woods when she ran away with an unknown man, only for the night to end in her tragic murder. Fifteen years later, Daniel remains unsettled by the mysteries surrounding his sister’s death as his tendencies toward outbursts of violence lurk beneath his taciturn demeanor. Unexpectedly, Daniel finds himself falling for vivacious high school senior Cassie (Grace Van Patten), who manages to break through his emotional barriers. Just as Daniel is ready to put his past behind him, Cassie discovers a sinister secret about that fateful night in the woods.

The Violent Heart was accepted into the narrative feature competition at the 2020 Tribeca Film Festival.

AFI alumni, do you have recent or upcoming work that’s streaming? Or a project that’s been impacted by the current climate? We want to know!